Online advertising is all about purchase intent, right? To quantify just how valuable the purchase intent of search is, it’s worth thinking about revenue per search. In 2006 Google’s revenue per 1000 searches was $45, in 2009 it was $35. (I’d like to put in a more recent datapoint, but my cursory Googling is coming up short.)

Keep in mind that Google search ads are non-interruptive units. By way of contrast, let’s talk about advertising on YouTube. These units either make you wait to watch the video, or takeover part of the video player while it is playing. Despite the fact these ads are designed to be more “engaging”, eCPMs for video are far lower vs search. Here are some approximations of revenue from top publishers on YouTube according to Peter Kafka:

[M]any big publishers say that after YouTube takes its 45 percent cut of the ads it sells, they frequently end up keeping about $2.50 for every 1,000 views their clips generate — that is, if their video generates a million views, they get $2,500. Other publishers say their split can be as high as $10 per 1,000.

I don’t want to spend more time comparing and contrasting eCPMs across different medium types, but the underlying point is this: some user experiences are inherently more monetizable via advertising than others. No matter how many fancy pieces of technology you throw in the mix to allow sophisticated segmentation, targeting, creative, etc, the context by which users are exposed to advertising sets the stage for the business.

They are currently valued equally by the private market.

I have always been optimistic about Pinterest as an advertising-supported company because of how users were using it from the very beginning. Pinterest is about organizing and planning things in your life. A big part of that organizing and planning has to do with products that you have bought or would like to buy. That seems like an ample amount of purchase intent which has always been a part of the core user experience. I imagine Pinterest could roll out Promoted Pins and most of the userbase wouldn’t notice.

Previous statements from strategic Pinterest investor Rakuten seem to agree with this analysis.

This is a tough one. Brands pushing coupons with short timeouts to users? Geo-fenced push offers? How would a call-to-action work from a disappearing message? Would the ad unit stick around inside of the Snapchat UI? The smartest ad unit would probably take advantage of the fact users are trained that stuff disappears so they would need to act fast before it goes away.

Even if we assume some sort of amazing killer ad unit is released, are users in a state of mind to want to consume advertising? It appears that Snapchat is a new communications medium, which seems very fundamental and valuable. However, in other communication mediums such as phone calls, email, or SMS, interruptive messages from advertisers are historically not appreciated by consumers.

So why would the private market value them equally? #

Here’s what the top of the US iOS app charts look like right now. Keep in mind that downloads are superlinear as a factor of rank. 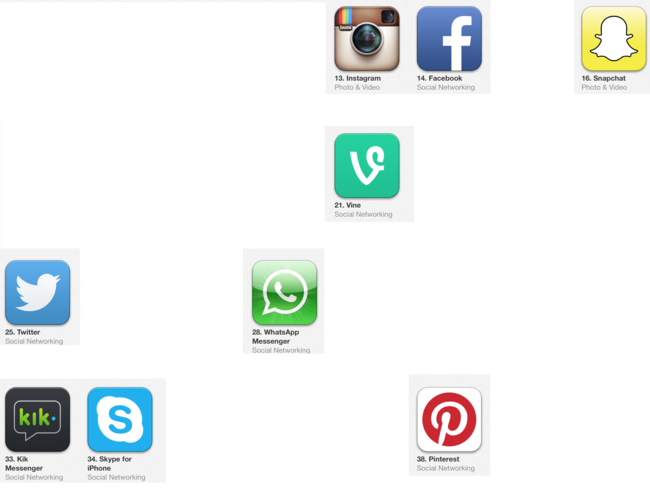 Several prominent people are up in arms about Facebook charging for access to users who have already Liked their page. I believe this debate is missing the big picture, and what we are in fact witnessing is the unfurling of the... Continue →